Jet power started to be considered as a potentially revolutionary step in aviation in the 1940s when aircraft designers of major world countries began experimenting with full-scale engines. Great Britain was one of the first to implement the technology, as undeveloped as it was, into real combat aircraft. The first jet aircraft to enter service in the RAF during World War II was the Gloster Meteor. It was followed by another fighter — the de Havilland Vampire.

The single-engine fighter-interceptor, codenamed DH.99, was conceived back in 1941 as de Havilland’s own initiative. The company already had an early version of a working jet engine, developed in-house, the Halford H.1. At the time, the main obstacle to building a successful aircraft — obtaining a powerplant — was therefore removed. 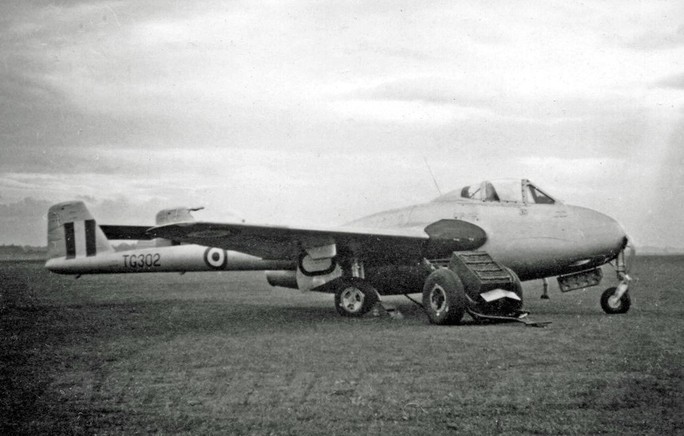 Somewhat later, de Havilland received an official specification E.6/41 for a jet-powered fighter. The H.99 fit that specification well. It was renamed the DH.100 and finalized by 1943. The most unorthodox decision made by the design team was using a twin-boom configuration. Early jet engines lost a lot of power if their exhaust plume was forced through a long pipe. Therefore, the engine was fitted inside a short fuselage, while tail planes were moved to the sides on two parallel booms. The horizontal stabilizer was elevated relative to the fuselage axis to avoid it being affected by the jet stream. Two rudders were located directly on the boom ends. The fuselage was partially metal and partially composed of wooden parts manufactured using a special process mastered by de Havilland while building the legendary Mosquito. 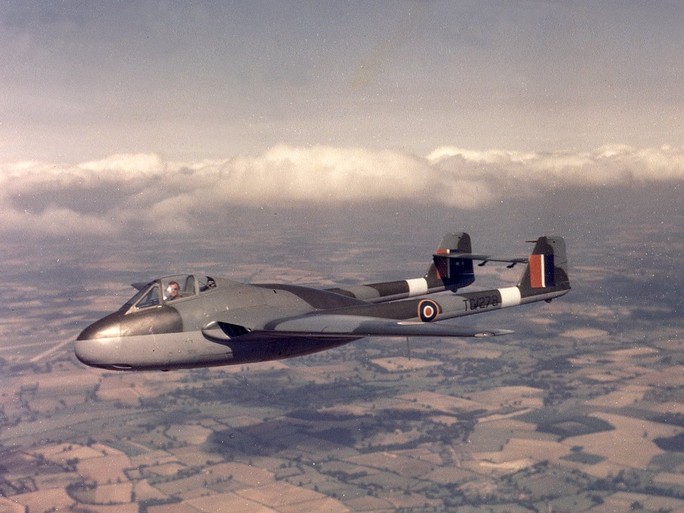 The aircraft received a codename: Spider Crab. The first prototype performed its maiden flight on 20 September 1943, soon joined by two more aircraft. Pilots noted the excellent responsiveness to controls, the excellent maneuverability, and that the future Vampire was easy to master. Considering that jet engines were completely unfamiliar to most pilots, this was a major achievement. The machine required several improvements, but as soon as in April 1944, the first batch of 120 Vampire F.1 aircraft was ordered. Initially they were fitted with Goblin engines — the production variant of the Halford H.1. Armament included four nose-mounted 20 mm Hispano autocannons. The fighter was progressively improved and modified in the following years, receiving new powerplants, equipment, a pressurized and heated cockpit, additional hardpoints for outboard armament, and fuel tanks. 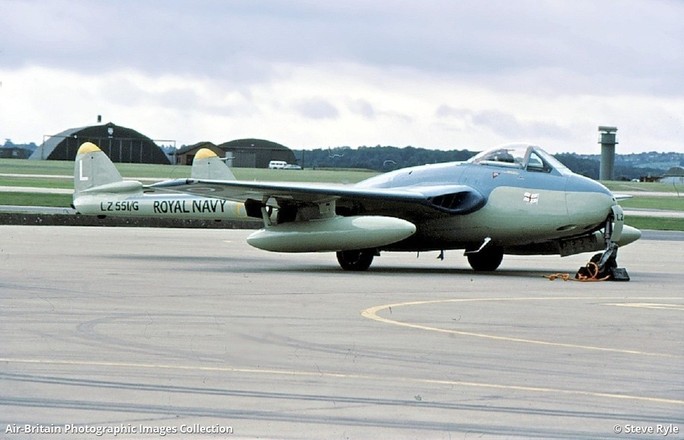 The naval version, called Sea Vampire, affected the carrier fleet outlook a lot, being used for research in carrier-based jet-powered aircraft extensively. Some sources even say that it was the Sea Vampire tests that formulated the need for the aircraft carriers’ designs to have the flight deck angled from the longitudinal axis of the vessel. This design is still the most common for carriers to this day. But the main role played by the Vampire in all its years of service was training pilots to fly jet-powered aircraft and prepare them for more powerful and fast machines.

The de Havilland DH.100 Vampire F.1 in World of Warplanes is a Premium Tier VIII British fighter. Its main features are maneuverability and firepower. Four 20-millimeter cannons provide good damage and accuracy at medium and short range, while great handling allows the Vampire to follow its target and keep it in the gunsights quite easily. As with the historical Goblin engine, the in-game one is not very powerful, but the speed and altitude characteristics are quite sufficient for comfortable dogfighting at medium altitude. All this makes the Vampire a great fighter for dogfighting fans that deals a lot of damage and outturns most of its rivals in the air.