Your first World of Warplanes experience might get rather bumpy with all the tricky controls and multiple head-up display (HUD) elements. In this section we will expand on the basics of playing the game and take a closer look at the Battle screen.

Getting ready for action

Before jumping into the heat of battle and wreaking havoc on the enemy, you need to decide which aircraft you are going to use.
All aircraft available to you are displayed in the Aircraft panel in the Hangar.

Scroll through the Aircraft panel to view all available aircraft.

You can filter the Aircraft panel content by aircraft tier, type, or nation if the panel becomes too long.

To select an aircraft, left-click the required aircraft in the Aircraft panel. The selected aircraft appears on the main screen.

To view the 3D overview of the selected aircraft:

To set an aircraft as primary, right-click an aircraft in the Aircraft panel and select Set as primary. The selected aircraft will be moved to the front of your panel and marked with a yellow ribbon.

Make sure your aircraft is combat-ready before getting into action.

The default control scheme for World of Warplanes is shown below. To customize your key bindings, or select an alternative control scheme, go to Game Menu > Settings > Controls. 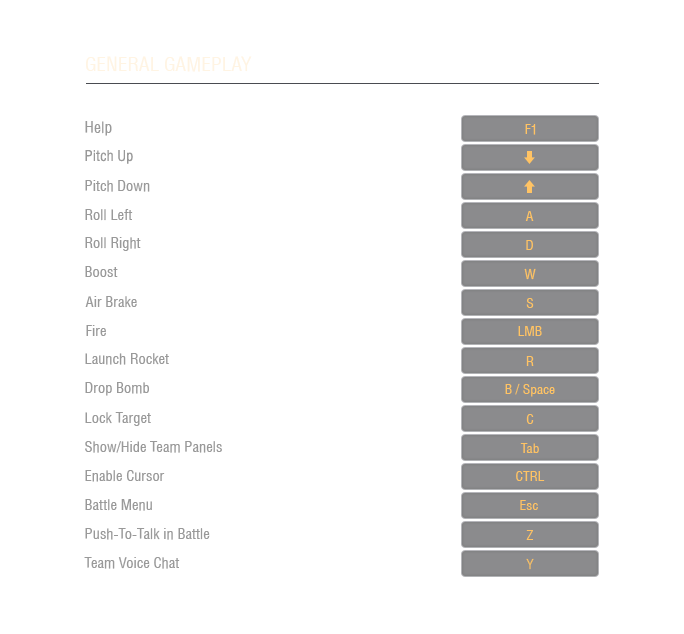 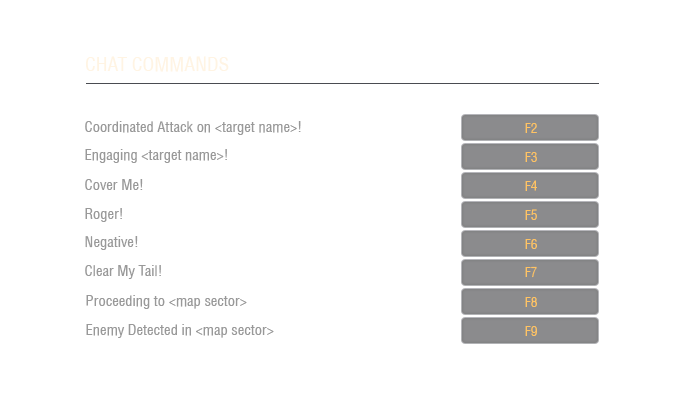 Now that you have selected an aircraft and tweaked the battle controls to your liking, either hone your skills in the training game mode, put newly acquired aircraft through its paces in the battle against bots or face real opponents in the standard battle mode.

The primary way of polishing your aerial skills is through the series of training sessions. World of Warplanes offers two training modes at your disposal:

After successfully completing each tutorial you are awarded with XP, credits and gold.

The award is given only once per tutorial.

This mode enables you to join an already existing Training Room or set up your own.

To join a Training Room:

You may filter Training Rooms by map and current aircraft tier.

To set up a Training Room:

Training does not affect your service record. All repairs, except ammunition and consumables, are free.

Battling against computer controlled opponents is an excellent practice ground for World of Warplanes beginners as well as players wanting to test new aircraft.

A team of one to five players, supplemented by bots, plays against an all bot team in a 15 vs. 15 format. The aim is to achieve and maintain supremacy or destroy all enemy aircraft.

The main objective is to achieve and maintain supremacy or destroy all enemy aircraft.

Each battle lasts up to 15 minutes. The map and players are selected randomly.

See the table below for more details on the battle rules: 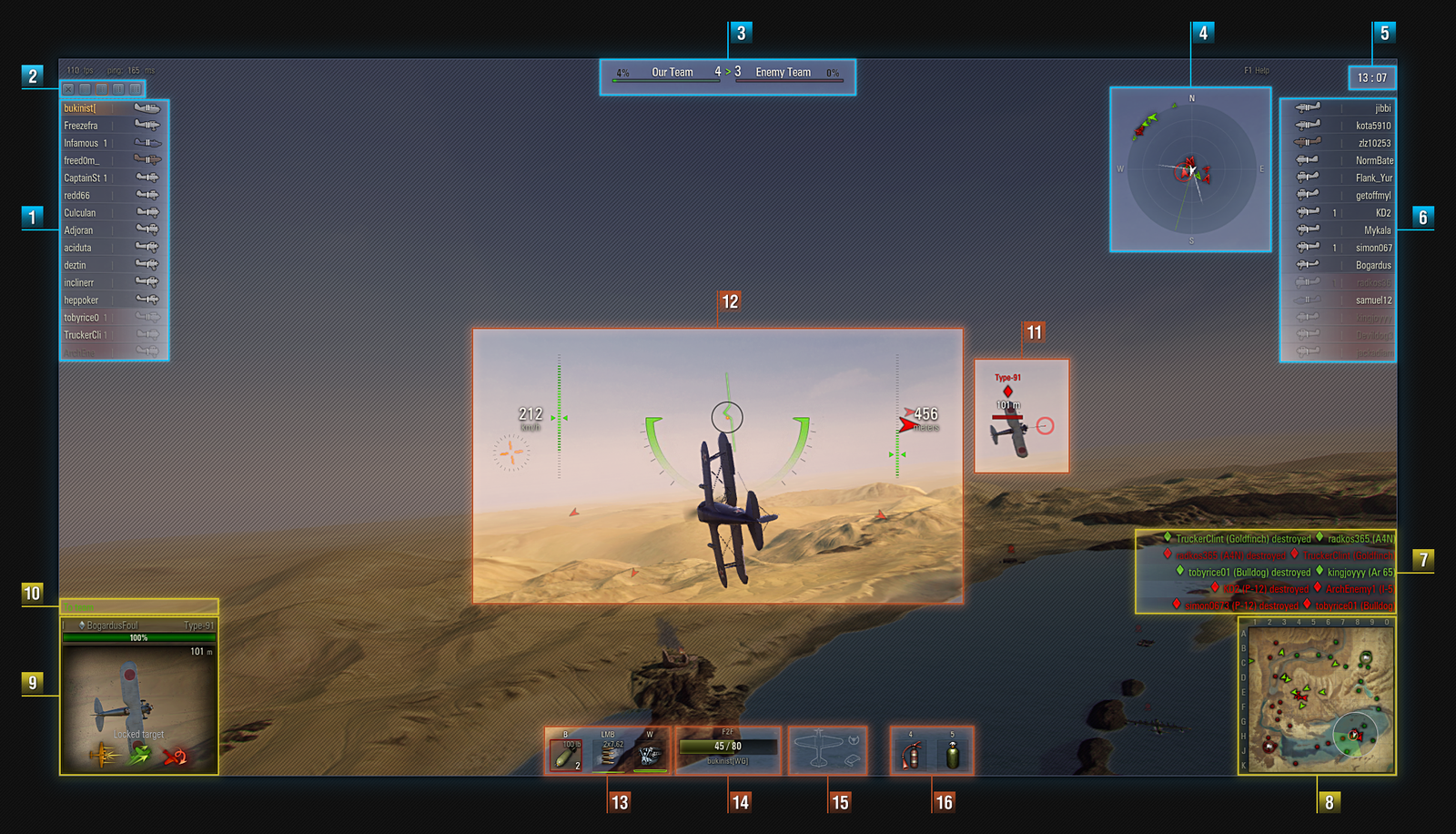 A list of allied team members with brief information on each player:

Use the settings to hide or switch between Team Panel modes.

To access the Team Panel settings, press and hold CTRL and select the required mode.

Displays battle progress for each team. A team that achieves 100% superiority wins the battle.

Displays the position of other aircraft in relation to your aircraft.

Battle countdown timer; a battle lasts up to 15 minutes.

Lists the members of a rival team, along with brief information on each player.
The information displayed depends on the Team Panel settings.

Displays player positions and mission objects on the map.

Once a target is locked, its vital stats and specification icons are displayed in the window.

Open the chat to communicate with other players. While the chat can be seen to everyone in the battle, you can also change the mode to talk specifically to your team or only members of your flight.

To type a message in the battle chat, press Enter. To toggle between the chat modes, press Tab.

All targets are indicated with markers. Enemy targets are marked red, allies are green, and flight members are yellow. The markers of destroyed targets turn dark. 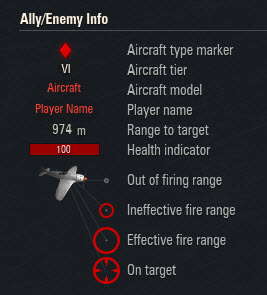 Marker display varies depending on the marker mode and parameters selected.

The reticle is displayed in the center of the Battle screen. Use it to aim the gun at targets. 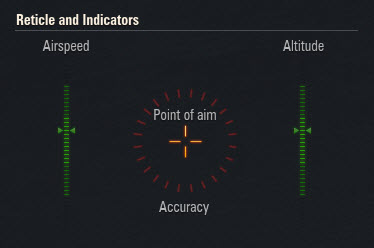 Altitude indicates the altitude range at which your aircraft is most effective, i.e. has maximum airspeed and maneuverability.

The panel displays information on the number and type of available ammunition, guns heat level, and a dynamic indicator of engine boost availability.

Displays information on the critically damaged aircraft modules and injured crew members. Any damaged modules (highlighted in orange) operate at a reduced capacity.

The panel displays information on the number and type of the available consumables mounted on the aircraft.