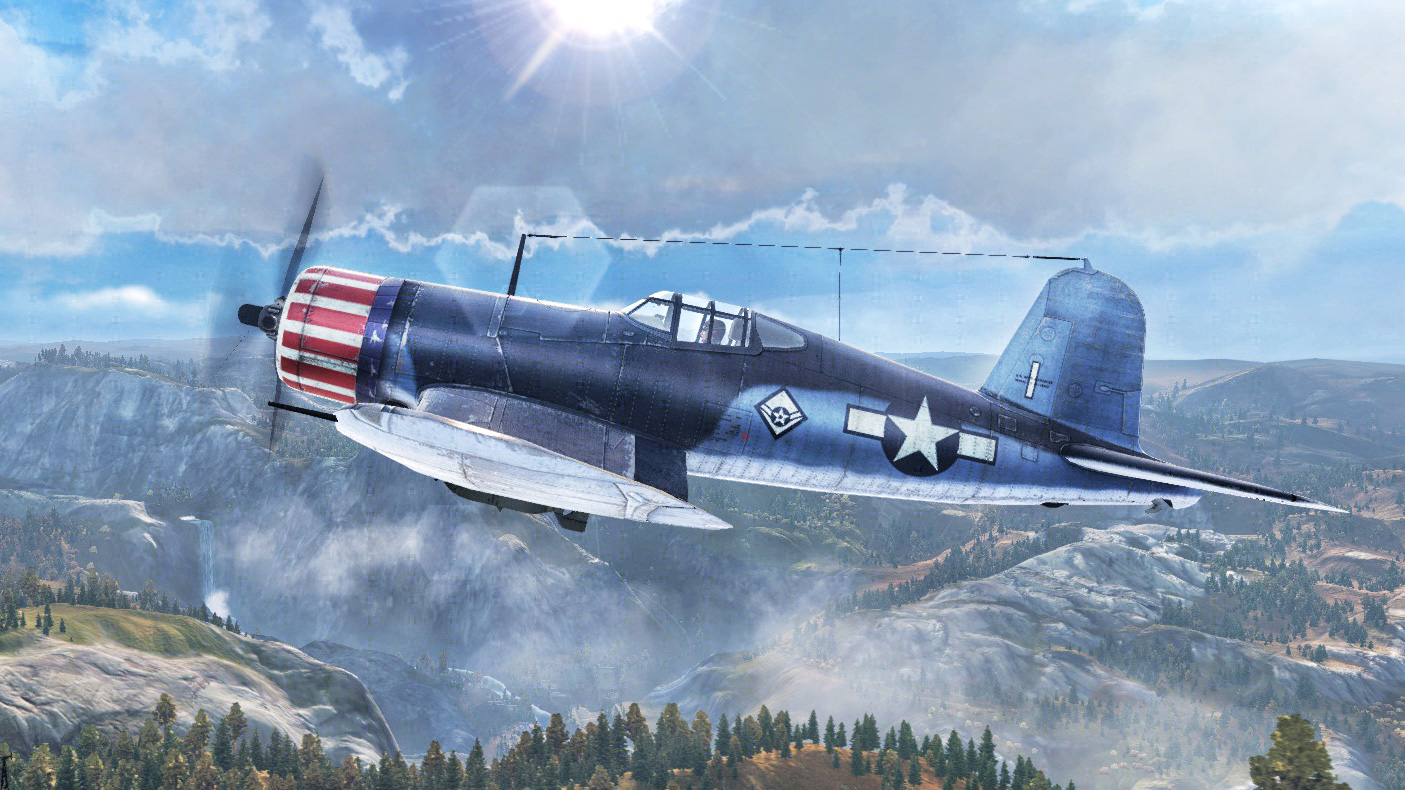 This week, our history spotlight is focused on the American F4U Corsair, an aircraft designed to meet very specific requirements.  With its over-sized propeller and unusual bent wing structure, you’d be forgiven for thinking at first glance that the plane was made from a “pick n’ mix” parts box. However, the plane was very carefully designed with strict objectives in mind.  Nonetheless, it went on to become one of the more versatile aircraft in World War II and is sometimes credited as the most successful with an 11-1 victory ratio.

As usual, we first take a look at the history of this warplane, and then a quick look at what you can expect from the plane in World of Warplanes.

During the War, the US Bureau of Aeronautics were notorious for publishing proposal requests with difficult requirements.  These requests were sent to the different companies involved in the design of aircraft and each had a certain amount of time to pitch their concepts for meeting the requests.  Often the requirements seemed unlikely to be achievable at first glance, by pushing the limits of the available technology.  However, the aim was to motivate the manufacturers into designing new technology to meet the requirements.

In 1938, one such request was sent out for a high performance, carrier-based fighter with four guns and anti-aircraft bombs.  The request was sent to all the major manufacturers of the time, who were invited to submit their designs.  Chance-Vought picked up the request and put their chief designer on the job, a man named Rex Beisel who had a saying: “The difficult we do immediately.  The impossible will take a week, ten days at most.” 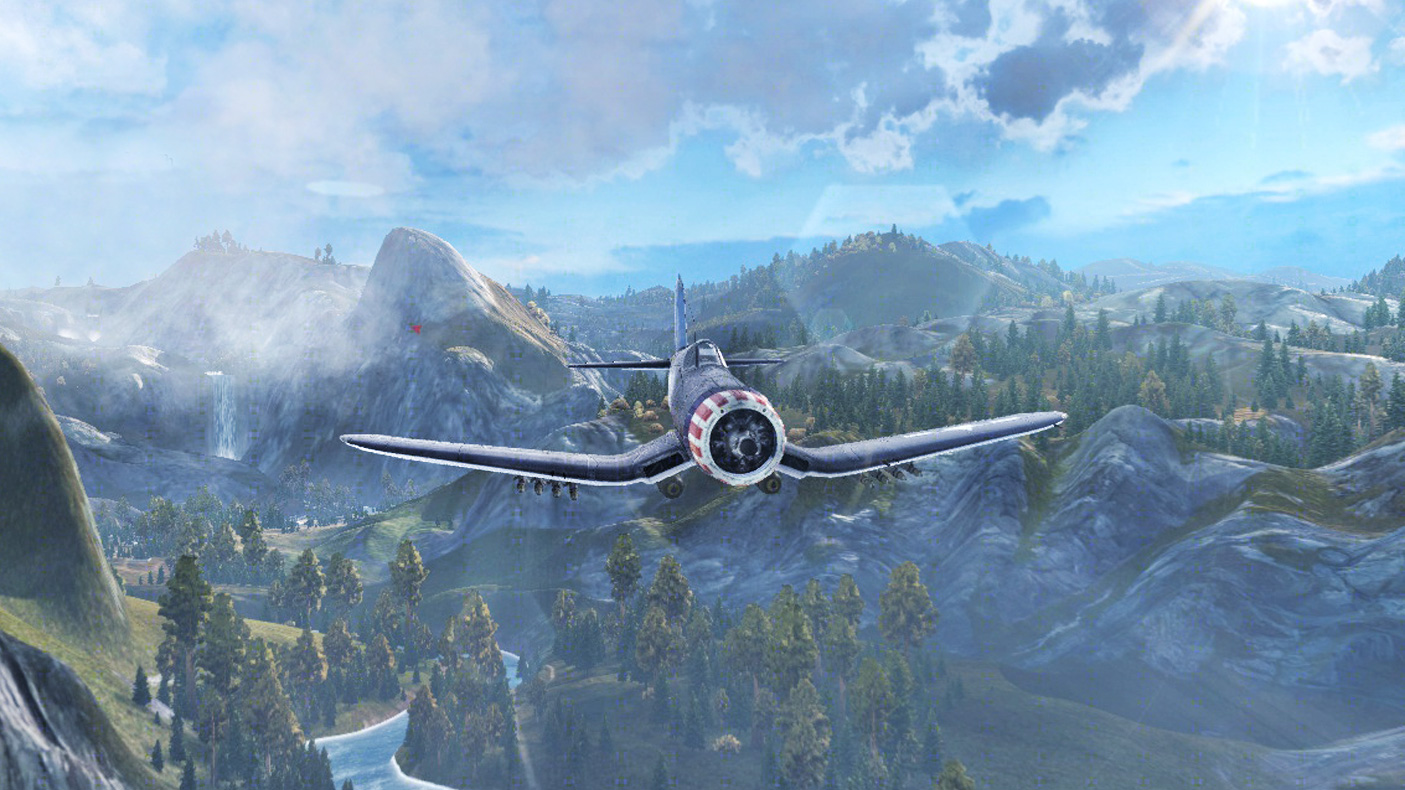 The first major design element to consider was the choice of engine.  One unusual element of the proposal request was that designs with liquid-cooled engines would be considered, contradicting a previous policy of only using air-cooled engines for ship-board engines.  Some of the companies involved in the bidding process went for this option, but Vought stuck with air-cooled radial engines for their proposals.

After consideration, the Bureau of Aeronautics went for one of Vought’s designs, the one featuring the new Pratt & Whitney R-2800 Double Wasp engine.  This was an experimental engine with 18 cylinders, twin row and was rated at a massive 1850 horse power – more than 100 hp for each individual cylinder.

Of course, this huge engine had really been designed for larger aircraft.  This meant that to incorporate it into the small frame of a carrier-based fighter, the designers had to think creatively.  In order to convert the huge power of the engine into thrust, the propeller had to be extremely large; around 4 metres in diameter.  However, this created a problem with deck clearance for the massive propeller.

The designers were left with a conundrum.  In order to have enough deck clearance, either the landing gear would have to be longer, or the propeller shortened.  Neither of these options were desirable.  The landing gear for carrier-based fighters had to be strong enough to withstand the pounding of a deck landing.  Lengthening the leg would weaken it too much,  and shortening the prop would be a waste of the power of the engine.

To get around this problem, the designers came up with a novel solution – the bent ‘gull wing’ design.  This meant that the landing gear could be mounted on the lower tip of the wing bend giving it enough strength for a deck landing whilst having enough clearance for the long prop.  It was later discovered that this design also improved the aerodynamics of the plane, boosting the top speed.

The wing design wasn’t the only innovation in the plane.  The designers also opted for joining the parts together with a newly-introduced technique called ‘spot welding’.  This meant there were no protruding rivets to interfere with the airstream.  Of course, since the introduction of spot welding in the 1930s, it is now prolific to the present day!

The rest of the airframe was designed with similar concerns – nothing was allowed to protrude, everything was streamlined.  Even the landing gear was designed with this in mind; instead of the classic retracting gear which left part of the wheel exposed, the wheels on the Corsair were designed to swivel by 90° and fold up to fit flat inside the bottom of the wing. 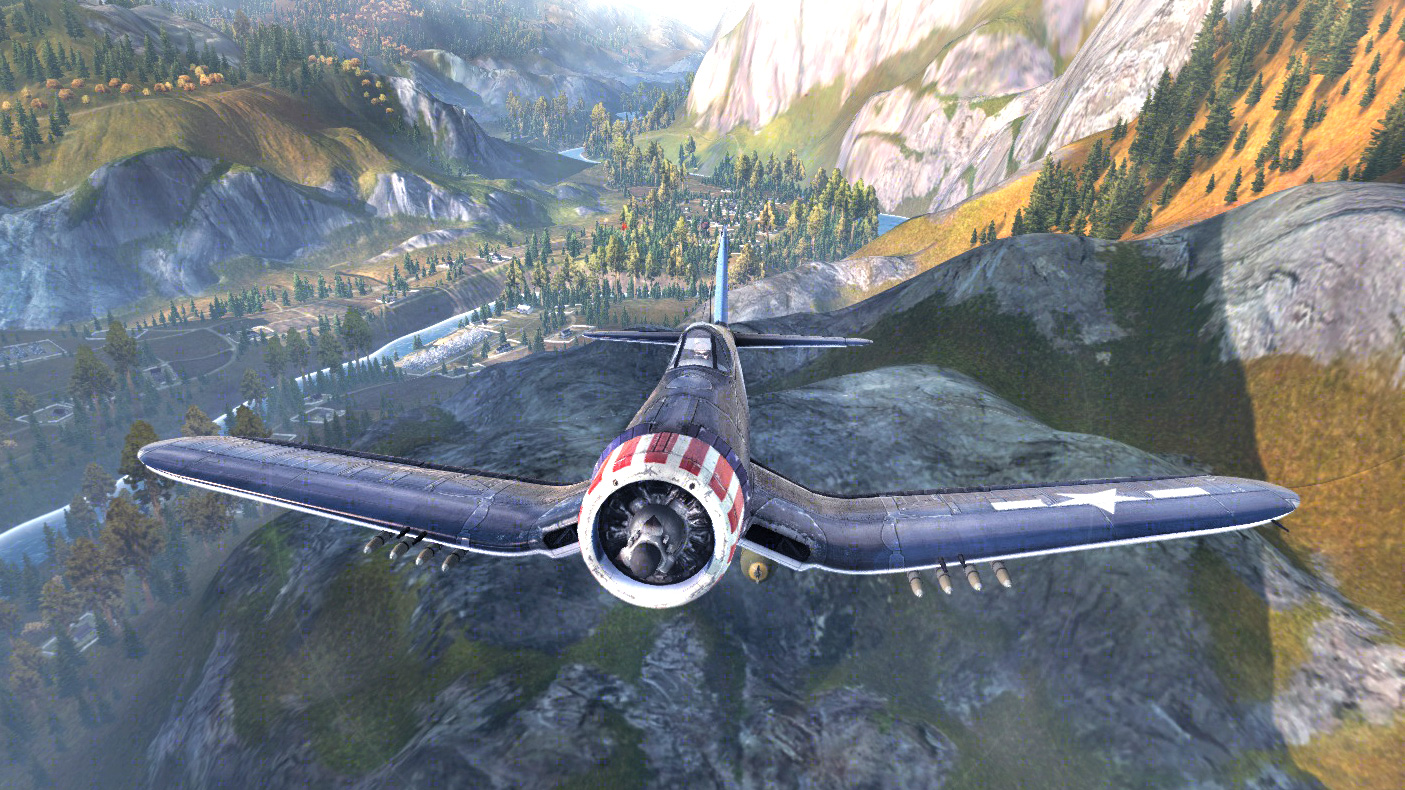 The first flight trials in 1940 were a success, setting a new record by being the first single-engine US fighter to beat 400 miles per hour (640 km per hour).  An order for 584 units was promptly made.

However, as the planes then started to undergo trials on various US carriers in 1941, problems began to emerge.  Many of these were to do with the very long nose of the plane – over 4 metres in front of the pilot.  When the plane was sitting in the take-off position, the nose pointed upwards, meaning that the pilot couldn’t see anything.  In addition, when landing, it made it impossible for the pilot to see the Landing Signals Officer.  Oil and fluid leaks from the engine compartment added to the problem, by streaking across the windshield, restricting visibility even more.

The result of these problems was that the Corsair was deemed unsuitable for carriers (despite that being the original design goal).  All the planes were sent to the US Marines for land-based duties.  Here though, they excelled and receiving an outstanding combat record.  Corsairs were also sent to Britain, France, New Zealand and Australia during World War II.

Indeed, it was the British who managed to find a way to use the plane on their carriers, by altering the final approach landing pattern to a slow continuous curve, only aligning with the deck to touch down at the last second.  This meant the pilot could keep the Signals Officer in view up until the last moment.   They also managed to fix the problem with the fluid leakage by fixing the panels shut with wire.  This diverted the fluid streams onto the fuselage rather than the cockpit.

For the US Marines and the other nations using the Corsair, the plane performed exceptionally well.  The Marines put the plane to good use in the Pacific Theatre against the Japanese, using islands as mobile bases to launch the planes from.

The plane had an outstanding success rate.  Exact numbers are disputed, but some texts state the plane managed eleven victories for every Corsair lost in air-to-air combat.  Sadly a lot more were lost to anti-aircraft fire, reflecting their common use as fighter-bombers.  However, the Japanese considered the plane to be a serious threat and nicknamed it ‘Whistling Death’ due to the distinctive high-pitched sound made by wind through the engine vents.

The plane also proved to be successful for the British Royal Navy who also put them to use against the Japanese, launching them off carriers.

The Corsair did get several upgrades.   The original Corsair was the F4U-1.  The F4U-2 was a night fighter version, used to provide air cover during night operations.  The F4U-3 was an experimental version using a turbocharger to maintain the power of the engine at maximum for longer periods of time.  Only a handful were made, though.

The F4U-4 was the first significant variant.  It featured an even larger version of the engine (capable of up to 2769 hp) and had a four-bladed propeller instead of a three-bladed one.  The cockpit was also redesigned to improve protection and visibility.  The F4U-4 arrived too late in World War II to make a difference, but was used extensively in the Korean War.

Two more variants followed – the F4U-5 and the F4U-7 (there was no F4U-6).  The F4U-5 was basically an F4U-4 with minor improvements, whilst the F4U-7 was a version developed exclusively for the French Air Force. 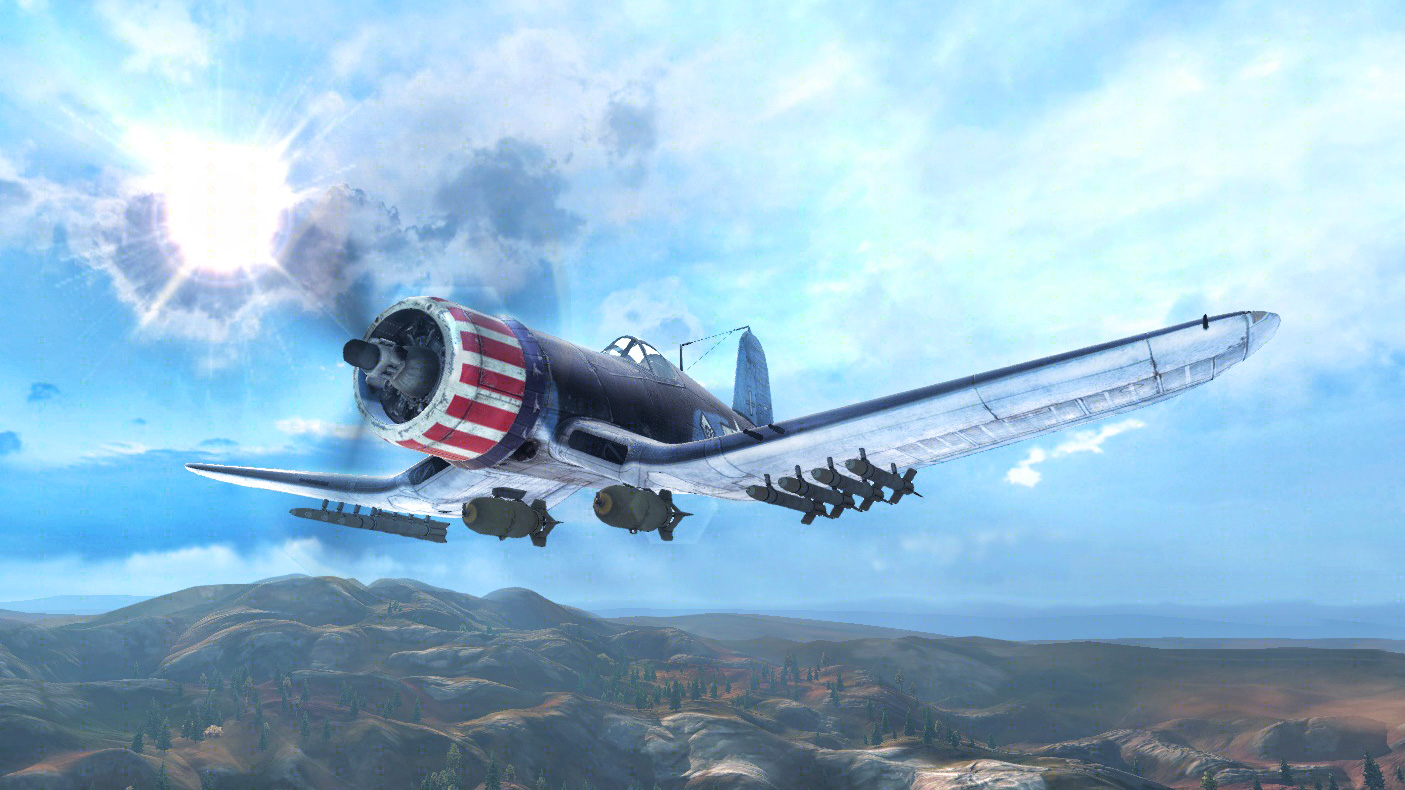 Once World War II had ended, the F4U-Corsair (now most commonly the F4U-4 variant) served extensively in the Korean War as close support.  As the war drew on though, it started to get very outclassed by the newer jet planes that were becoming more and more common.  Corsairs also served all over the world over the years following World War II, but were also gradually phased out in favour of jet engines.

A large number of Corsairs have survived to the present day, many in the hands of private collectors.  They are a common sight at air shows in America and across the world.  This video shows the Corsair in action.  During the flybys you can hear the distinctive sound that resulted in the plane being nicknamed ‘Whistling Death’!

The F4U Corsair in World of Warplanes

The F4U in World of Warplanes is a Tier VI Carrier-based Fighter in the American Tech Tree.  It comes with several configurations, all variants of the F4U-1.  The plane is a powerful beast that could take some time to master, just like in real life.  However, in the hands of an ace, it will be a lethal opponent to face.  Use your power to stay ahead of your foes and fly tactically – you are not the fastest of turners, so you can’t rely on being able to dodge incoming attacks.  Weather them as best you can and deliver death of your own before moving on.    Some of the configurations available for the plane come with two bombs.  If you have them, choose your targets carefully and drop them as soon as you can.  Your manoeuvrability will improve as a result.  Otherwise, you can choose a configuration without them for immediate manoeuvrability but at the cost of the benefit to your team’s superiority.