The American Curtiss P-36 Hawk is an early example of a metal frame aircraft and was a frequent sight in the 1930s and 1940s.  As well as service with the US Army Air Corps, it spread across the world and was heavily used in Europe (most notably by the French) and across the Pacific as well.  In this article, we take a closer look at this forefather of aircraft engineering.

The Curtiss P-36 Hawk was originally a private endeavour created by the Curtiss-Wright company.  The project was designed to be an entry into a contest organised by the United States Army Air Corps (USAAC), taking place in May 1935.  The company decided to enter a full-metal fighter with a retractable landing gear and appointed Northrop engineer Donovan Berlin to head up the design team.

The original prototype was called the Model 75.  It had a Wright XR-1670-5 engine and was made completely of metal, with the control surfaces covered in fabric.  The early test flights showed that the plane was capable of achieving 281 mph (452 km/h).  However, there were problems, most notably with the engine reliability.  The plane was considered to be very comfortable to fly by the pilots, but lacked armour or self-sealing fuel tanks (although these deficiencies were normal for the time).  In addition, the retractable landing gear design that was used had already been patented by Boeing resulting in an additional cost for Curtiss in the form of royalties payments.

It was time for the contest.  The plane flew off to Ohio to compete in the fly-off, but then the unexpected happened.  One of the competitors – the Serversky P-35 crashed on the way!  The result was that the contest was postponed. 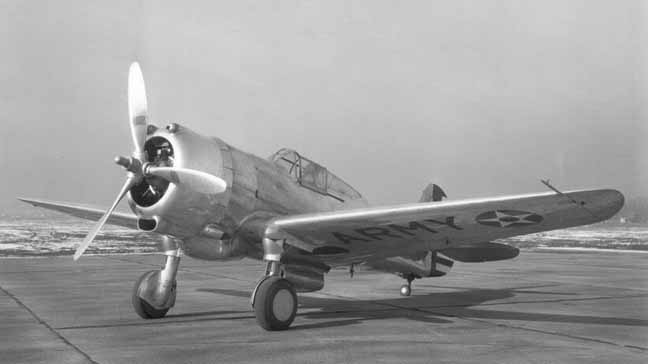 One Person’s Misfortune Is Another’s Fortune

Curtiss took advantage of the delay to make some more improvements to their plane.  The new version was named Model 75B.  The main change was that the unreliable engine was replaced with the wright XR-1820-39.  The fuselage was also reworked, improving visibility.  This included the addition of the distinctive scalloped rear windows.

The final fly-off contest finally took place in April 1936.  However, things didn’t go well.  The new engine failed to meet its performance rating and the plane only achieved a 285 mph (460 km/h) flight speed.

The competitor, Seversky had recovered from the plane crash, and although their plane had also underperformed and was more expensive, they were declared the winner and awarded the contract for 77 planes.

However, the USAAC quickly voiced concerns about the spiralling political turmoil in Europe and were worried that Serversky would be unable to deliver.  They wanted a backup option, so they put in an order to Curtiss for three prototypes.  The Model 75 plane now became the P-36.

Dedication... That’s What You Need

Further remodelling was carried out.  The engine was changed yet again, this time to a 900 hp Pratt & Whitney R-1830-13 Twin Wasp engine.  The scalloped rear canopy was enlarged even further, whilst a retractable rear landing wheel was added to the undercarriage.

The new version performed exceptionally well, with the result that in 1937 the USAAC placed an order for around two hundred units.  This was the biggest order ever placed during peacetime.

Several direct variants of the P-36 were produced, named simply from P-36A to (X)P-36G.  These variants were generally similar to the original prototypes just with upgraded engines and weapons.   However, the P-36 didn’t see extensive use by the US who quickly opted for its successor, the Curtiss P-40.  However, a large number of modified P-36s went out to allied nations across the world.  These were the planes that gained the ‘Hawk 75’ designation.  In total around 1400 units were produced, of which only 200 or so were original US P-36s.

Exporting to the World

The plane never saw much use in the US, but it proved popular in other nations – in particular the French who made ample use of the design.  After receiving 100 Hawk 75A-1s from the US, they began to make modifications and variants of their own, designating them the Curtiss H-75.  One of these planes won the first victory against a German fighter during World War II for the French.  Over the course of the war, H-75s won 275 confirmed victories against enemy planes and were possibly instrumental in over 100 more.

The British had decided against purchasing the Hawk, but ended up in possession of 229 of them through wartime activities such as diverting cargo destined for occupied France or claiming aircraft flown by escaping French pilots.  The British gave the plane the designation of Mohawk and put them to use in the Commonwealth territories of India, Burma and South Africa.

The other major use of the P-36 was Finland.  The plane proved to be very popular with the Finnish pilots, who went on to win a phenomenal 190 victories with just 44 aircraft.

Sadly, very few P-36s have survived to the present day.  A handful can be found in museums around the world, but the only one in Europe is at the Imperial War Museum in Duxford, UK.  They have a French H-75 A1 which not only can be visited and admired, but has been restored to fully flying condition!  Keep an eye out for it at air shows across the UK and beyond.

The P-36 in World of Warplanes

The P-36 is an American Tier IV fighter.  Several configurations are available for it, matching the real world development of the aircraft from the prototype version YP-36, through the production versions P-36A to G.

The plane is mainly designed for manoeuvrability, shining best at close-quarter dogfighting.  However, it can also be used for dive attacking, or even for shooting at ground targets.

With this plane, your manoeuvrability is your main asset.  Use it to stay one step ahead of your opponents, because if they manage to hit you, your thin armour means that it will hurt.  Try and get in close to your opponents to make best use of your powerful machine guns.